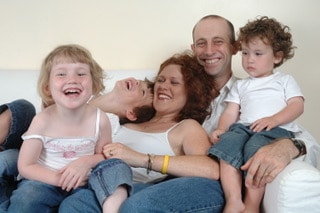 When Katrina Timms’ second child Emily was born, she had a very distinct feeling they weren’t to be together very long.

“I assumed it was me that was going to die,” she says. “I thought God was telling me something and I couldn’t ignore it. I started writing letters to her so she would know who I was – that’s how sure I was that we weren’t to be together.”

Four years passed, and driving through Sydney, Katrina says she, “turned the corner, and all I could see was Emily dead in her bed. So, I pulled over and took a moment – I had never had a vision before, and there was nothing in the picture that said she was dead, but I knew she was dead. I told my husband Greg, I told my prayer group, and everyone started praying. I saw a Christian counsellor and she said, ‘I don’t know what it is, but God’s obviously trying to tell you something’.”

Six months later on a family holiday Katrina noticed that Emily couldn’t see properly, and it seemed to be getting worse day by day. She booked Emily in for an eye test when they got home. The family saw an optometrist late Friday evening who told them he’d looked at everything optical and that there was nothing wrong there.

“I knew then that she had a brain tumour,” Katrina says.

Just two days later Emily was wobbly on her feet, fell over and hit her right hand. By the following morning, she couldn’t use the right side of her body. They took Emily to Westmead Children’s Hospital where she underwent a CT scan.

“The doctors came back to us, sat us down, and told us she had a diffuse pontine glioma and that she had three months to live. They told us the tumour was massive and that it was diffuse (meaning it had fingers and was creeping everywhere and was inoperable). They said there was a 100 per cent chance that Emily was going to die, and an 87 per cent chance that our marriage would fail,” Katrina says.

The previous year, Katrina and Greg had watched as a family in their church dealt with a terminal cancer diagnosis in one of their children, and the marriage breakdown that had followed.

Katrina says, “God and I are mates, and He is in the thick of it and just dropped stuff at me. I said to Greg that God doesn’t give us these experiences for nothing, and we talked about how we needed to work out what we were going to do different. We still had two boys who need a Mum and a Dad, and we were going to lose Emily and we were going to need each other. So we created our Terms of Engagement with Cancer, and they worked really well for us, and God was really good.” 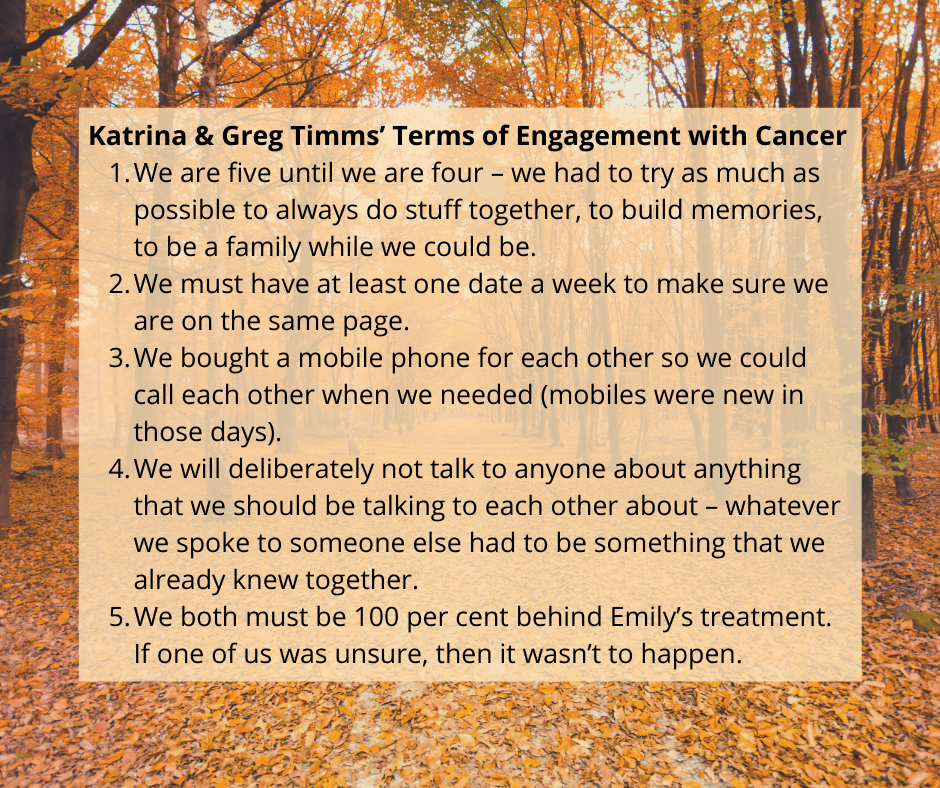 When it came to telling Emily, Katrina says she tried to think of the words she would know and told her they doctors had found a “lump in her head.”

Emily replied, “so Mum, what you’re telling me is I have brain cancer and I’m going to die.”

Katrina says, “I had a split second of wondering if I should lie and make this feel good or tell her the truth, and I said, ‘that’s exactly right’.”

Katrina said to her, “I think we should do whatever the doctors tell us to do and just get in and live our best life and let the dying bit be God’s business. He’ll know when he’s ready for you and we’re just going to do the best we can until we get there.”

And Emily said, “okay, what are we doing first?”

“She was very aware of where she was going and who she was going with and what was going on and had a maturity that sort of blew my mind often,” says Katrina.

After around eight months of radiation and chemotherapy treatments, an MRI showed that there had been marginal growth, which meant the hospital withdrew all treatment.

Four weeks later, Emily said to Katrina, “I’m a bit scared of having to go by myself. Would you come with me?”

Katrina said, “In a heartbeat, but I don’t think the boys will cope if both of us go. But I’ll do you a deal – if you can live your best life, make your best effort and try really really hard, I will let you know when it’s going to happen, and I will not let you go until I know Jesus has you. And we used Sleeping Beauty as the picture for her that she would just go to sleep in my arms, and he’d kiss her awake in heaven.”

In early June, Emily got her Make-A-Wish trip, and her wish was to meet Princess Mary, but that wasn’t possible at the time, so instead they came to Tasmania to see everywhere Princess Mary had been.

“We had a great time, but the tumour was certainly taking effect. We came down on the Spirit of Tasmania from Sydney – she walked on to the boat, chatting to people as she went. We flew home 10 days later, and I had to carry her to the plane and her grandparents couldn’t understand what she was saying when we got to the airport,” says Katrina.

“She wanted to see Dr Geoff to make it all slow down, and he said all they could do was steroids, but she wanted to do that, so we did that.”

That week Emily had to have a nasal-gastric tube put in, and Katrina had to feed her through the tube, and at the end of the week after a weekend of lunches with both sides of their family, they got home and saw that Emily was blue.

They raced to Westmead. Greg resuscitated Emily in the back seat while Katrina drove, and when they got there, after suction and other interventions, Emily stabilised, however, the doctor explained that Emily was struggling without the oxygen mask.

“She couldn’t speak by that point, so we did two blinks for yes, one blink for no. I asked her, ‘Do you want to go home?’ Two blinks.”

They took her home and put on her favourite movie – Beauty and The Beast. The two other boys were in bed.

“I said to Greg that he better go get the boys so they could say goodbye because I didn’t know how it was all going to play out. And both boys came out and did their goodbyes and then we put them back in bed and they went to sleep. I think about it now and it seems so ridiculous, but you do what you do,” says Katrina.

“I thought she was doing ok with her breathing, so I asked her if I could take the mask off, and two blinks. We watched the end of the movie, then went to bed. I slept in her bed with her, and Greg slept on the floor next to us.

“I woke up a couple of times during the night and she was still with us. In the morning she woke up and wanted to see the sunrise and so we showed her the sunrise. Then she wanted Bible stories and princess music. So we did that.

“And her breathing was starting to shallow out. I told Greg to call the hospital and let them know that we are doing whatever this is. I’d never had anyone die with me before, so it was all very new. Her oncologist was flying home from Chicago so we couldn’t speak to him directly, but we had the rest of the team talking Greg through it, and then him talking me through what we were doing.

“She died about 9am on Sunday morning, in my arms. I held her a long time. Later, when I had stopped holding her and gone and got dressed, I walked back into her room and that was my vision, from before she was even diagnosed.” 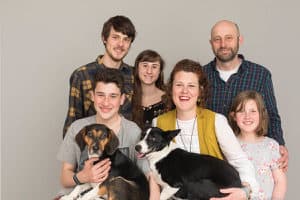 This year it will 15 years since Emily died, and 14 years since Katrina and her family made the decision to move to Tasmania.

“As terrible as it is – and it is absolutely terrible she’s not here – God had a plan for her and I’m doing my very best to honour that.

“I don’t think any of us are here for no reason, I think [God] has a purpose in everything and in her life and her death I have seen more people come to be Christians than I have in any other way. I’ve known whole families who have been baptised because of her story and our stewardship of it.”

“I get very sick of the Christian platitudes like God will give you only however much you can cope with. That’s just a lie. Life is hard and the only way I know to cope with hard is to have him. I got dealt what I got dealt and I know that I can do this because he gives me the strength I need to do it, not because I’m a particularly strong person.”

Katrina now works as a Chaplain at the Royal Hobart Hospital, something she says, “is all about God’s providence over my life. It’s about my relationship with him and me wanting to be obedient to him, me knowing that I can’t actually do any of this without him. I am just a husk, I am useless if he’s not with me.

“I have a unique, particular life experience that means I can see where the distress is when I walk into a room, and I can go toward it and I can help that person unpack it, and I don’t have to bleed out my story to do that,” says Katrina.

“Way back there where I was with Emily in hospital is where the heart desire of doing what I do now hatched, and I don’t think God takes us on a journey for no reason. I can look back over my life and see absolute God moments and God threads and you can just look at it and rejoice, or you can look at it and say, ‘wow, what’s next? What do you want from me? What can I do to add to your glory?’”