How did I arrive at this place….?

My journey began three months earlier when my wife Libby was invited to join a team from our church on a mission trip to India. St Clements Kingston has been supporting overseas mission by sending teams to India for some years.

I asked if I could tag along not really knowing why.

There are many areas of ministry but one is trying to connect with sex workers, as these women (and some men) are trapped and marginalised with little chance of escaping this form of modern slavery.

Only by God’s grace have Christian women been allowed to meet weekly with a small group of women in the brothel. The aim being to see them supported and eventually freed from their desperate lives.

Indian organisation has its own rhythm and can be “on/off” or vice versa depending on a myriad of variables, and even more so when you are arranging a meeting at a brothel with considerations of security, transport and venue.

We gathered in the bar area (shed conditions) of the single level complex and slowly a dozen or so young women appeared from the building with a couple of young children who we suspected belonged to some of the women. What struck me was the cheerfulness of these women, but each appeared older and had an emptiness in their eyes.

After some basic communication, using hands and some Hindi words, our interpreter offered for us to pray with them. This was accepted.

By this time some men who we suspected were the pimps had joined the gathering.

As we prayed, we asked the Lord to bless these women and bring a sense of hope to their lives.

During this time, I kept a wary eye on the men and bar manager, who was staring intently at us and probably wanting us to leave as we might be bad for business as the bar was soon to open and the girls needed to start work.

We finished by distributing some gifts (small soaps) brought from Australia, but suddenly one of the women took the bag from me and gave them out, including to the children and surprisingly to the men, which eased the tension.

We hoped the women got to keep the soap.

A few weeks later this scene is still etched in my mind. As I reflect on the tragedy and hopelessness of it, I am convinced that Jesus was present and bringing comfort and hope to these women in such desperate circumstances. In a deeply humbling sense, we had nothing to offer other than the love of Jesus and yet ultimately, He is their (and our) ONLY HOPE. 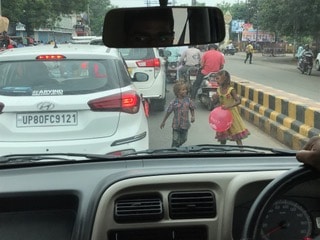 Children selling balloons to drivers at a busy intersection in Kolkata

This trip was disturbing, and God’s Holy Spirit continues to remind me of His hope amongst such hopelessness.

Is that not applicable to us as well?

I am reminded and comforted by Matthew 25:40:

“The King will reply, ‘Truly I tell you, whatever you did for one of the least of these brothers and sisters of mine, you did for me.’