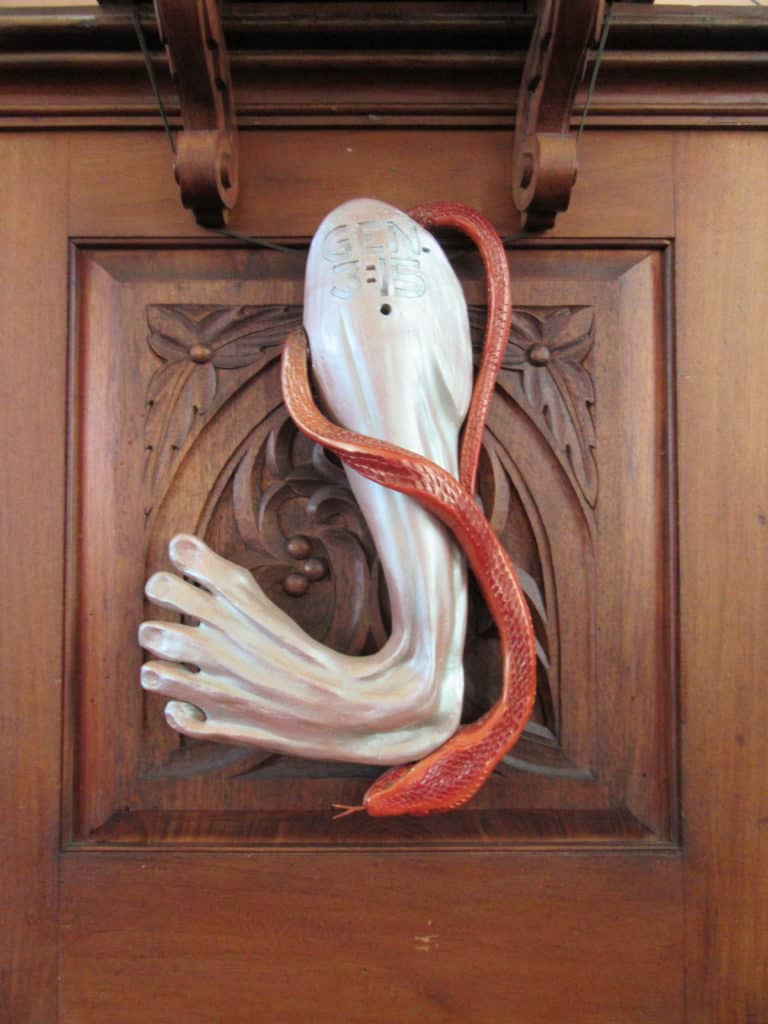 For over thirty years Maz Gill-Harper has been making artworks, aiming to open conversations about the Lord Jesus, both within the church and the secular world. Here Maz explains her GEN.3:15 art installation at St George’s Anglican Church, Battery Point.

“In Genesis chapter 3, Adam and Eve choose to believe the serpent (Satan) rather than God. Yes, they were tempted, but they exercised their given free will.”

“Likewise, we can also be tempted to disbelieve what God has said to us via the scriptures.”

“God is understandably upset by this turn of events. In response, he first places a curse on the serpent, the latter part of which, is recorded in Genesis 3:15: ‘I will put enmity between you and the woman and between her offspring and yours. He will crush your head and you will strike his heel’. And so God announces the titanic struggle between the Deity and the devil, for the souls of humanity.”

“So who exactly is this ‘he’?,” asks Maz. “With hindsight we recognize it is Jesus, the offspring of Mary, who crushes Satan’s head and the devil also wounds Jesus. We know who wins!”

“The ‘leg’ of the sculpture is actually a big letter ‘J”. It is under-glazed with flesh tones and over-glazed with iridescent silver to express Jesus is both fully man and fully God.

“The serpent, formed in the shape of an ’S’, is under-glazed a rich vermillion red: DANGER! It is over-glazed with iridescent gold, for this is no ordinary snake, but the disguised former anointed cherub, the mighty, but fallen, angel, Satan,” explains Maz.

The sculpture hangs over an early 20th Century woodcarving on the pulpit at St George’s. It looks like the ‘Tree of Life’ and is by a former parishioner, a Mrs Wise.

“Genesis chapter 3 also records the expulsion of Adam and Eve from the garden to prevent them eating from the ‘Tree of Life’ and living forever in their sinful state,” said Maz. “It chuffs me that the art of two women artists working over a century apart, should combine to express the gospel truth.”

“Only through the redemptive work of Jesus (J) and His victory over Satan (S) will believers have access to the ‘Tree of Life’ in the paradise of God.”

“In Romans chapter 16, Paul greets his beloved co-workers in Christ in Rome. In verse 10 he adds, ‘Be wise about doing good and innocent of evil and the God of peace will crush Satan under your feet soon!’”

“Compounding this, Luke 10 verse 19 has Jesus delegating his authority. ‘Behold I give you power to tread on serpents and scorpions and over all the power of the enemy and nothing shall by any means harm you.’ Do we believe this is no less for us today?:

“GEN. 3: 15 is the first Messianic prophecy in the Bible of which 356 have been fulfilled in Jesus so far. The remainder will be fulfilled at his second coming and beyond. I find this very faith-building. I hope you do too!,” said Maz.