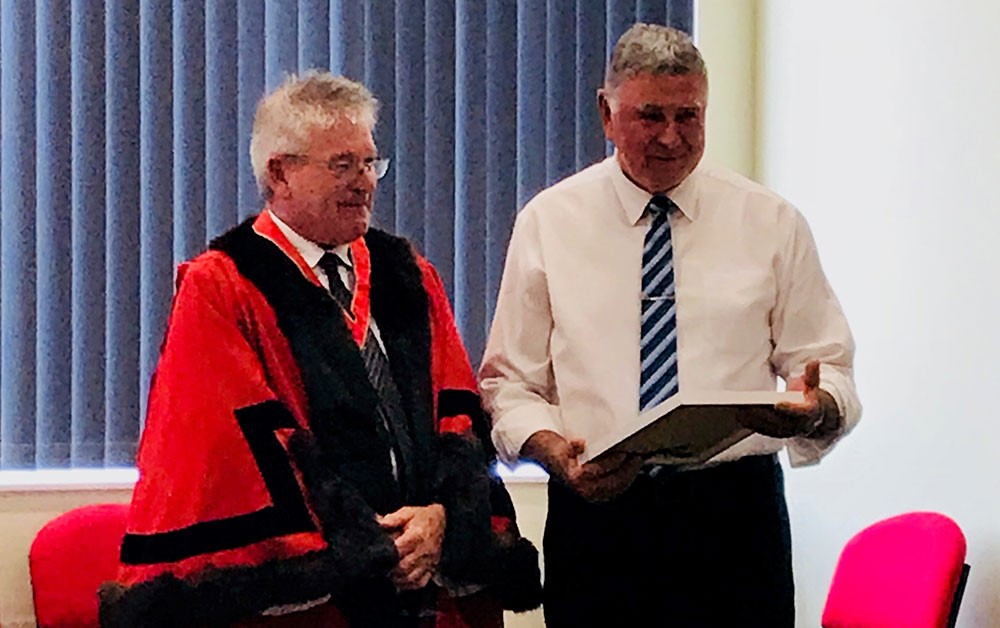 Kevin Bailey receiving his Australia Day award from the Mayor of the West Coast, Phil Vickers.

On January 26th, Revd Kevin Bayley was named the West Coast Citizen of the Year!

Moments into a conversation with Kevin and you can see why he was presented with this award. He is one of those special people.

Since 2007, Kevin has been the Minister-in-Charge of the West Coast Parish. He shares this role with his wife, The Revd Colina Bayley. They both minister at Holy Trinity Church, Strahan and St Martin’s Church, Queenstown.

“We are a team. It is US, with the Lord, loving the people of the West Coast,” said Kevin. “I think Colina was equally deserving of the award.”

Both Kevin and Colina were born and grew up on the West Coast of Tasmania.

In the 1970’s, Colina visited church when only three older ladies were attending. They faithfully showed her the love of the Lord, and she became a Christian. Kevin admits that he “hung around the edges for a long time until becoming a Christian in 1986”.

Kevin shares that while “Colina has always been a lovely person”, his life has radically changed since accepting Jesus into his life.

“I wasn’t always a kind person, until I met the Lord.”

“After becoming a Christian, I fell in love with my wife properly, respecting her and honouring her,” he said.

“The Lord’s favour has been upon us big time. It’s amazing what he’s done in us.

“We haven’t become religious nuts – the Lord just changed our lifestyle, and people have noticed, and respect us for it.

Kevin naturally shares his love for Jesus whenever there is an opportunity. “I’ve even prayed for a man inside the wood-chopping arena,” said Kevin. “I’m always meeting and talking with people who open up and share of their struggles. My prayer list is always changing following conversations I have with people.”

Kevin and Colina love the West Coast, and especially it’s people. It seems that the people love them too.

“We have a privileged ministry. We interact with people at significant times in their lives, like baptisms, weddings and funerals. When you share these occasions with people it creates a special bond,” he said.

Kevin was on the West Coast Council for many years and was involved during the turbulent amalgamation process. He resigned to take up his Ministry role.

This award recognises Kevin’s outstanding contribution over many years serving and helping his fellow neighbour and community.

Part of our Diocesan Mission is to be a people of blessing to our communities. Kevin and Colina are living this out beautifully, and in so doing bringing glory to God.

Congratulations on your award Kevin!